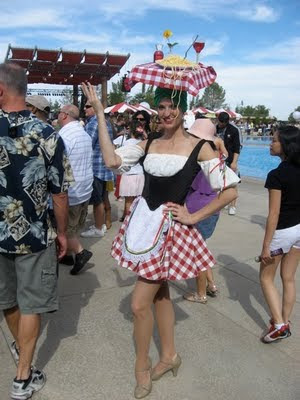 An acquaintance sent me this picture from an Italy Festival, and it was so grating on my critical sensibilities that I had to medi[blog]tate on it. I began by asking myself if this person is 1) of Italian heritage, 2) if so, genuinely feels they are celebrating their heritage, 3) knows they are commoditizing Italian culture down to stereotypical elements that make the culture dismissible, rather than celebrate a rich culture pre-dating Cicero and Quintilian?

This picture reminded me of the poster below that I've seen with "Mexico" super-imposed in the upper left-hand corner.

While the quasi-Chiquita banana woman has enough semiotic negative connotations attached to her through the exploitative business practices of banana conglomerates in Central and South America, what is disturbing from a purely spatial-visual perspective is how the dark 'other' is situated in a subservient position in the background, working as the lighter-skinned female beckons with the suggestive fruit which she bears. Like the woman with the spaghetti hat above, these symbols of culture work against complexities and nuances of cultures that theses images serve to cover over.
Posted by Cruz Nicholas Medina at 1:32 PM No comments:

The title above comes from an article in Tribal College Journal of American Indian Higher Education, although I found the it on-line at Mexican Uprising.

"Colleges Before Columbus: Mayans, Aztecs and Incas Offered Advanced Education Long Before the Arrival of Europeans" summarizes pre-columbian centers of education (paideia--my word for the week--Greek for education/play)--article on Greek notions of play.

Posted by Cruz Nicholas Medina at 10:46 AM No comments:

The Whiteness of Nerds

(found this picture on the site http://nerdarama.com/)
The heading above comes from an article by the same title, written by sociolinguist Mary Bucholtz.

Since I just meditated on "Stuff White People Like", it seems to follow logic that I should mention the scholarly work that has addressed similar linguistic choices aligned with the ideology that accompanies white privilege.

In Bucholtz's article, in which she interviews the students at a high school who self-identify as 'nerds' and speak in a super-standard form of English that integrates scientific discourse, Bucholtz explains, "engaging in nerdy practices may itself be a form of white privilege, since these practices were not as readily available to teenagers of color and the consequences of their use more severe"(96).

True, SWPL isn't referring to itself as a book for nerds, or for people of privilege, but Bucholtz' findings seem to point to a connection between the availability of these choices and privilege.

"The Whiteness of Nerds" also points out that while these linguistic practices of high school students, who self-identify as 'nerds', further distance themselves from their African American counterparts, Bucholtz doesn't make claims to say that this isn't necessarily a conscious strategy of the nerd students.

Separating themselves from the African-American population was "not necessarily an intended consequence...nerds defined themselves in opposition to both coolness and blackness" (94)

Posted by Cruz Nicholas Medina at 11:25 AM No comments:

I was looking at the popular blog turned book "Stuff White People Like" and it reminded me of a few issues that arose this summer during the New Start speaker series.

One of the speakers caused quite a stir when he explained to the group of students that by his definition of racism, white people couldn't be victims of racism because they are a part of the dominant hegemony. Now this flies in the face of the notion of reverse-racism, and I think that's what a lot of students took umbrage with.

Coming back to SWPL, I found myself going through the blog (which doesn't have that many updates since the book tour) and of course there are items I agree with and those I don't, but I also thought about bell hooks' Where We Stand: Class Matters (I experiment with Google Books embed below). It also reminded me that the sensibilities, which SWPL points out, align with what I observed on my last trip to San Francisco, home of both acceptance and pretension. In the multicultural city of SF, you can just as easily meet Asian, Eastern Indian and numerous other ethnicities with these tastes because they appeal to a certain bourgeois, middle-upper class cultural aesthetic.

But the different posts on SWPL reminded me of those people who I sometimes feel buy things just so that they can talk about it, i.e.: 'I found this great little farmer's market that has the best organic avocados,' or 'I eat sushi at least once a week, but there are some great happy hours nearby.'

Some of what makes these comments grating can be the affect of elitism, which is consciously enunciated to overcompensate for whatever feelings of insecurity in the speaker. Although I also see how these choices attempt to create a culture for this group who associates with the label 'white' and will at times describe themselves as 'cultureless.' At the same time, those who aren't apart of this ethnic group will sometimes be victims of discrimination from within their own ethnicity for their willing acceptance of assimilation/transculturation.
Posted by Cruz Nicholas Medina at 12:29 PM No comments:

Gear Up in the News

The article does a nice job of highlighting some of the hard work of Gear Up team member Rachael Wendler and Desert View teacher Maria Elena Wakamatsu.

Read the rest of the article
Posted by Cruz Nicholas Medina at 8:30 AM No comments:

Why we teach Visual Analysis

False Diversity
(*Thanks to Faith Kurtyka's witty and entertaining 2009 New Directions Presentation*)
These two images, the one on the left a doctored photo that inserted an African-American student into the cover of Wisconsin's Application, have received a fair deal of discussion with regard to how diversity is represented at universities as opposed to the reality of student populations.

(picture available on many sites on-line, but I found this one at abcnews.com)

Teaching a section on visual analysis, I found that first year students responded to this photo (first asked to visually analyze the doctored photo, and then showing the original without the African-American student). The section in the Student's Guide to First Year Writing set up the discussion well by analyzing one of UA's own marketing pictures, but the reality of how we are visually manipulated became more clear when students saw the Wisconsin example.

Students seemed to be left with a 'if we can't trust the university, who can we trust?' Which is always a nice way to get students to re-evaluate/re-visit assumptions.

Posted by Cruz Nicholas Medina at 2:44 PM No comments:

School of Fish in a Big Pond?

So I'm definitely mixing metaphors, but a couple months back Stanley Fish

wrote "What Should Colleges Teach?", a multiple part piece, in which Fish argues that multicultural politics shouldn't be included in classroom curriculum. For those who remember Fish's name from Intro to Lit Theory courses, you'll remember he's the expressionist, reader-response proponent who a lot of people tend to boil down to a 'whatever the piece makes you think about, write on that.'

Just as that's not exactly Fish's philosophy, to say that he has no points to be made in his Times piece would ignore some of the aspects of writing and teaching grammar in context that some of my grad colleagues have admitted to omitting. Fish warns about putting a political agenda ahead of the teaching of good writing fundamentals--but all of you know this--we all use student examples to demonstrate how grammar sometimes works and doesn't.

The D&I in partnership with the EGU at UA got together and had a salon-like discussion about Fish's article, and I'm thankful to those who attended, and to Jun Liu, our department chair who helped make it possible to have an academic discussion with a focus on the teaching community of graduate students from Lit and Rhet/Comp.