A Day of Good News

From the HuffPostLatino:
"Dolores Huerta, a civil rights advocate and labor leader who fought for farmworkers rights alongside César Chavez, will be honored with one of the nation's highest civilian honor -- the Presidential Medal of Freedom.
Huerta told The Daily Beast that news of the honor came as a surprise to her.
“I was humbled, thrilled, and surprised,” she said. “I never expected to be nominated.”
Huerta is now 82 years old, a mother to 11 children, and grandmother to seven. Huerta considers her proudest accomplishments to be, "Spanish-language ballots for voters, public assistance for immigrants, toilets in the fields, drinking water protection from pesticides," and an immigration act which gave legal statust to over a million farmworkers, according to The Daily Beast."

This is great news in light of Huerta's anti-SB 1070 activism and her participation with the TUSD Mexican American Studies program.

Additional Good News
Past contributor Natalie A Martinez and Crossroads Collaborative scholar and Londie Martin have agreed to guest blog in June! Look forward to their posts, I know I am looking forward to reading the work of both writers.

In the meantime, feel free to check out Martinez's amazing past post:
http://writerscholarprofessional.blogspot.com/2011/06/guest-blogger-natalie-martinez-on-poch.html

And I can't resist re-posting my photo with Dolores Huerta from her speech at a conference on Decolonialism at the U of A. 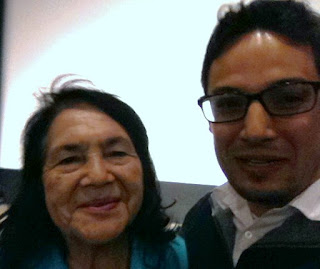 The original post from where the photo came: http://writerscholarprofessional.blogspot.com/2010/12/dolores-huerta-cherrie-moraga-leslie.html
Posted by Cruz Nicholas Medina at 2:58 PM No comments:

Expires June 8
From pbs:
"At Tucson High School, ethnic studies programs have improved graduation rates among Latino students. But some state politicians think ethnic studies promote “racial solidarity” and anti-Americanism. When books are banned and the programs eliminated, teachers and students fight back in a modern civil rights struggle."

Posted by Cruz Nicholas Medina at 5:02 PM No comments:

"Only They Can Tell Their Stories"

(Photo by Fernanda Echavarri on AZ Public Media)
In stark contrast with my last post on News Channel 4's sensationalized coverage of the Mexican American Studies Banned Book reading club, Arizona Public Media's story on the club allowed for voices taking part in the book club to be heard without uninformed commentary by those not in attendance.

From the Arizona Public Media website:
“I wanted a safe place where we could come together to discuss and engage on the banned texts,” Juarez said. “And hopefully in reading them, we can understand the value they have to our youth, and we will understand why some people perceive them as a threat.”
Posted by Cruz Nicholas Medina at 3:16 PM No comments:

Yesterday, I attended the book club for books banned when Tucson High's Ethnic Studies program was outlawed. A Channel 4 camera crew documented book club's generative session in which the club engaged with the themes of the texts, often relating them to relevant sociopolitical contexts; however, the Channel 4 coverage creates a distorted depiction of the story, imposing a polemic argument that allows an un-credible, anonymous commentator to present a narrow perspective. News 4's coverage further inflames paranoia by allowing the voice in the shadows to shape the presentation of the story, juxtaposing an extremist voice in shadows with the well-spoken participants of the book club.

In January, 2012, the TUSD Governing Board voted to suspend the Mexican American Studies program. The books used in the program were collected from classrooms and put into storage. This book club will read and discuss some of those books. The purpose is to demonstrate, through the reading of these works, the value they have for youth in our community. The book discussions will be facilitated by Marissa M. Juarez, PhD from the University of Arizona. You can find some of the books at the library. All are available at Amazon.com

Reading schedule:
May 16: Pedagogy of the Oppressed

May 30: Chicano!: The History of the Mexican American Civil Rights Movement

June 27: The Lone Ranger and Tonto Fistfight in Heaven

July 11: The House on Mango Street 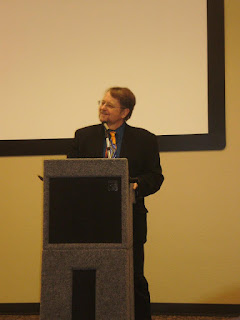 Posted by Cruz Nicholas Medina at 9:19 AM No comments:

Cheech Marin on "What is a Chicano"

Read this the other day, and it made me laugh. Marin is right in that Chican@s name themselves and don't agree with other Chican@s, as a Chican@ who disagrees with aspects of Marin's definition, especially the omission of the Nahuatl Xikano etymology. The definition he gives about Chican@s in the U.S. reminds me of how pocho is used with Mexican American communities. A past post on Cheech regarding SB 1070. 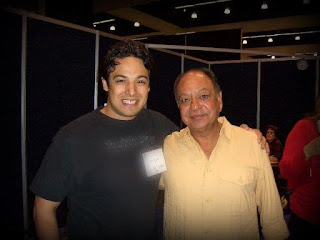 (Marin and I at Book Expo signing in '08)
Click here for the original post in its entirety: http://www.huffingtonpost.com/cheech-marin/what-is-a-chicano_b_1472227.html?ref=latino-voices

"To me, you have to declare yourself a Chicano in order to be a Chicano. That makes a Chicano a Mexican-American with a defiant political attitude that centers on his or her right to self-definition. I'm a Chicano because I say I am.
But no Chicano will agree with me because one of the characteristics of being Chicano is you don't agree with anybody, or anything. And certainly not another Chicano. We are the only tribe that has all chiefs and no Indians. But don't ever insult a Chicano about being a Chicano because then all the other Chicanos will be on you with a vengeance. They will even fight each to be first in line to support you.
It's not a category that appears on any U.S. Census survey. You can check White, African-American, Native-American, Asian, Pacific Islander and even Hispanic (which Chicanos hate). But there is no little box you can check that says Chicano.
No wonder Chicanos are confused.
"Because I am the only official version of what being Chicano is, I say Mexican-American is the politically correct middle ground between Hispanic and Chicano. Like in the song I wrote to be sung by a Chicano trying to be P.C. "Mexican-Americans; don't like to just get into gang fights; they like flowers and music; and white girls named Debbie too."
(The video he refers to)

It never bothered me until one day I thought to myself "Hey, wait a minute, I'm not Mexican." I've never even been to Mexico and I don't speak Spanish. Sure, I eat Mexican food at family gatherings where all of the adults speak Spanish, but I eat Cheerios and pizza and hamburgers more. No, I'm definitely not a "Mexican." Maybe I was "Mexican-ish," just like some people were "Jew-ish."
Self-identification saved the day. Yet, I still was dissatisfied with what I wanted to call myself. A Chicano was someone who could do anything. A Chicano was someone who wasn't going to get ripped off. He was Uncle Rudy. He was industrious, inventive, and he wants another beer. So I got my Uncle Rudy another beer because, on that day, he showed me that I was a Chicano. Hispanic my ass, I've been a Chicano ever since."--From Cheech Marin's blog post on Huff Post Latino
Posted by Cruz Nicholas Medina at 1:09 PM No comments:

"The Whitewashing of Arizona" by Eric Liu

From Liu's piece:
"There is a community of Arizonans who live in constant anxiety. They worry that their neighbors want to persecute them. They feel surrounded by hostile strangers. They believe that public opinion and public institutions have been mobilized to undermine their place in society." 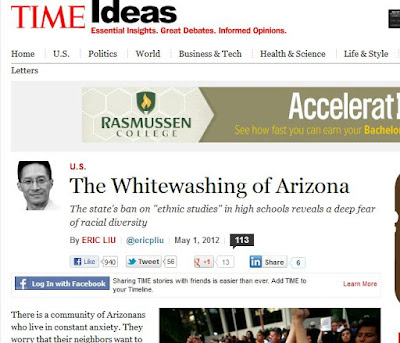 Posted by Cruz Nicholas Medina at 8:44 AM No comments: