An Evening of Banned Literature Reading at the University of Arizona
The Dean of the Humanities introduced the event by pointing out that Banned Book Week originated in 1982, and since then 11,000+ books have been challenged.

Organizer Prof. Adela C. Licona explained that the ban of books in Tucson is about access to culture, freeing us of ignorance. Licona argued that Manuel Munoz, Helena Viramontes, and Sandra Cisneros write for those who know poverty, who know people experiencing these stories, and people who are learning about these stories.

Manuel Munoz began his reading by saying that the scrutiny of the books on the banned book list come from a fear of repercussions, further explaining that the term "banned" should be replaced by terms like challenged and contested because "banned" silences people through fear. 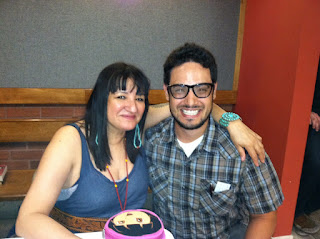 (Cisneros and I)
Munoz echoed the assertion of another Mexican American writer who had visited Tucson, who had stated that in Tucson these books are considered traitorous, whereas anywhere else they would be an AP English class. These texts include the lives and patterns of life that Munoz recognizes.

Munoz noted that no one knows how powerful can be if books are on the shelf because people need to be led to them. His knowledge about the craft came across as he stated that stories serve as a compressed act, and additionally that details should resonate with readers.

The stories in the MAS banned book list match, according to Munoz, the stories that parents say around the kitchen table, which in turn made parents players in the role of storytelling. After reading a selection from a short story, Munoz ended by saying that the writing of Viramontes and Cisneros brought them the world, and their writing serve as doorways to literacy and college access--their presence there that evening provided a moment for celebrating the power of reading in our lives. 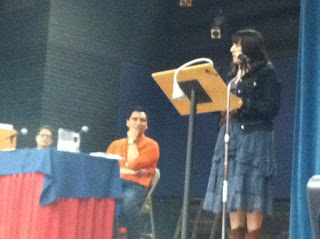 (Cisneros reading)
Sandra Cisneros began by jesting that a good ban in Arizona is a good reason for a reading. She said she'd been asked to read from House on Mango Street, but she told the audience that she'd written that 25 years ago and wanted to read something newer.

She read from a forthcoming piece called "Canto," in which she paid homage and evoked Dylan Thomas with a refrain along the lines of "rage, rage, do not go to bed nights in sensible whites and beige" [I apologize for not capturing the exact phrase, but the essence of the verse].

Cisneros thanked libraries and teachers. She said when she was younger she thought all books belonged to the state because they always read "Property of the State" across them. And then she shared a story about finding a beloved book at the Sears bargain basement when she was a child. From what I believe she said was Alice in Wonderland, which her mother paid 50 cents, Cisneros experienced poetry, magic and humor. Interestingly, she noted that she also believed that all literature was British. 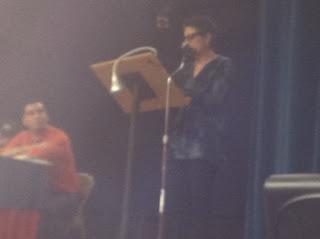 (Viramontes reading)
Helena Viramontes began by noting that we often don't appreciate libraries until budget cuts close them, adding that they are incredible spaces for people from bookless homes like her own as a child.

She explained that she had two main influences as a young person when it came to reading: her father's encyclopedias and her sister's Bible. From these texts, she came to believe as a young person that literature was information and the truth of parables.

[Pardon any misspellings and/or other errors--written directly following event]
Posted by Cruz Nicholas Medina at 11:23 PM