An Evening with Spike Lee

An Emphasis on Education

An evening with Spike Lee included his narrative of education, coming into film-making, studying at Morehouse College, the impact of the Summer of 1977 with an 8mm camera and his experience in the film industry.

Lee advocated loving what one does, feeling blessed that he's been able to do something that he is passionate about--he said that grad students choose what they love. 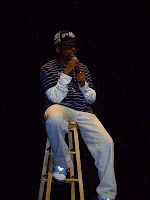 He began by saying, "Parents kill more dreams than anybody."While attending Morehouse, Lee said there were a lot of expectations for the students because Dr. Martin Luther King Jr. had attended Morehouse, so a lot of young men came with their parents' expectations to be doctors and preachers. Most parents wanted better for their children than they had, so a lot of them sat their children down when they said they wanted to do something in the arts. He said that many parents explained, "Me and your mother did not work two to three jobs so you could wait tables or drive a taxi--and if you're living under my roof, wearing my clothes and eating my food, you'll get a good job and get a good pay check every two weeks."

There's a lot of pressure, he said, but many years later you'll be a miserable human being. He said you have to 'cut the umbilical cord' because the decision we all make in college impact the rest of your life--it's not just a random thing--and if you think it is, then you need to think about it again. Being in college, we have the chance to take liberal arts classes and discover gifts. He still considers himself lucky that he found film through the 8mm camera that he got as a gift from someone he can't remember. 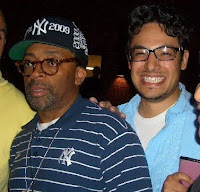 The film he shot in NY during 1977 turned into a film that was well received by his fellow students, encouraging him to pursue film further.Lee explained that film school taught him the grammar of film; like the grammar that constructs a paragraph, film school taught him what went into telling a story through film. But at the time, he said the main thing that film school allowed him was access to equipment, something that's not as large an issue, given the 'digital revolution. 'Wanting to attend USC film school, Lee said he didn't score astronomically well on the GRE, so he wasn't accepted, but he got into NYU, where they understood that GREs had little connection to film. 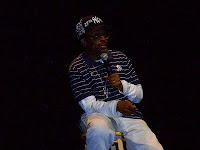 At NYU, he said everyone got the chance to make film. At USC, one had to submit a script to faculty to have the chance to film--it was run like a studio system. At NYU, he won an award, which got him an agent, but he didn't get any offers. While fellow students were getting music videos and after school movies, Lee was asking his agent to try and get him an after school special. Waiting for offers to roll in, he realized his award wasn't going to get him offers handed to him.He put a script together, got some actors together for pre-production, but when no money came in for funding, he realized that he'd written a movie with helicopter and car chases that he'd never be able to technically film with no budget.

Crawling before running was what he learned, in addition to the lesson that the script would've turned into a bomb that would've ruined his career. So he put together She's Got to Have it, which Lee said, in addition with Hollywood Shuffle ushered in a Black renaissance in film. A fan of Woody Allen, Lee said that he liked Allen's films, but asked 'what New York' was he showing?'
I'm going to have to post more later, but I just had to post this picture of Mr. Lee and I looking at different cameras. We take, and take, and take only to want more from our public intellectuals, and I never thought I'd say it, but it was harder to get a picture with Mr. Lee than with Salman Rushdie (another picture for later blog post).
Posted by Cruz Nicholas Medina at 10:23 PM