Coming Together to Remember
As a part of the Social Justice Advocates program, Eduardo Delci spoke about his "Journey with Cesar Chavez" this afternoon in the Cesar Chavez building, a great topic considering the recent issue in Texas education. 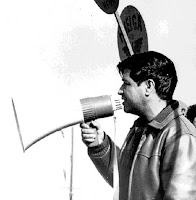 Growing up in a small farming community in Chandler, Arizona, Delci graduated from college, joined the Peace Corps in Ecuador, before returning to the U.S to work for what is now Americorp in New Mexico. His goal there was to work with farm workers to alleviate poverty by strengthening economic base through implementing community credit unions.

Delci worked with Maria Rufo, who connected with Chavez's wife Helen, who served as treasurer of the Farm Worker's Union, at a central valley California meeting for credit union organizers.
Delci explained that at the time, from 1958-1965, many agriculture laborers only earned $5-10/week, and the credit unions asked for $1.50 membership fee that went into a savings account. The money that the credit union accrued went towards loans of around $15o that went to home renovations, including the installation of indoor plumbing and refrigerators. An interesting aspect was that Chavez advocated for the build up of these credit unions in a faith-based manner, asking laborers to put in 10% of their earnings, which seemed to draw on the Catholic religious baseline that many migrants shared. 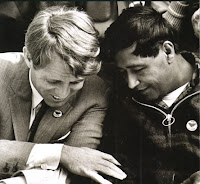 More than anything, Delci emphasized Chavez' nonviolent resistance--a strategy that is often overlooked given the amount of violence associated with the business practices of teamsters and union busters. Delci also pointed out the importance of understanding how large an organization that Chavez led farmer workers against--with California's economic power, it needs to be understood how much economic and social power the agriculture producers and industry possessed.

When Chavez endured his hunger strike of 25 days, he was protesting Arizona legislature that attempted to make peaceful protests illegal assemblies. The Arizona representative at the time, Jack Williams, was compared by Delci to Joe Arpaio.