Law Student Researches Controversy in Colombia
Teaching research, I appreciate the stories that NPR Latino USA presents because they address the different sides and arguments of a controversy. Unlike cable news, the ideological appeal is the judgment of the audience and not the impulsive reactions of pathos.

"Paul Bieber is a private investigator and law student in California. He has an abiding interest in the investigation of instances of human rights abuses. This summer, he went to Colombia on a 10-day fact-finding mission organized by Witness for Peace, the social justice organization based in Washington, D.C."
http://www.latinousa.org/929-2/
Listen to the full story at the NPR site, or listen to it at the Public Radio Workshop site:

Together We Thrive in Tucson

A Bittersweet Moment of Unity 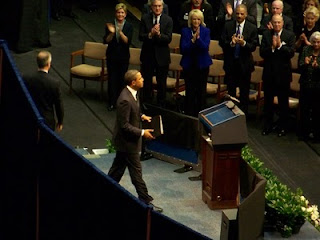 I had the chance to attend Pres. Obama's appearance here in Tucson yesterday. On my way out, a reporter with a recording device asked me for my response and I told her that it was a beautiful event, but it was unfortunate that it came about because of tragedy. I explained that Tucson and Arizona are in need of healing because we are in a conflicted and contested place. Too quickly, sides go on the attack when wounds are still fresh. 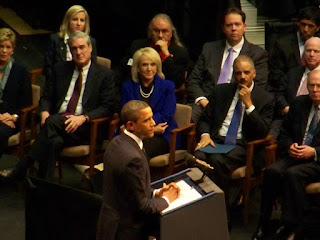 (photos by Amanda Wray)
What I found frustrating being attendance was the flippant attitude of college age people who treated the event more like a concert than a moment for healing. Raised consciousness is a process. We have hope that those who lacked the understanding of gravitas might reflect on the event as one step towards critical consciousness. As the saying goes, every saint has a past and every sinner a future.
Posted by Cruz Nicholas Medina at 2:45 PM No comments:

Arizona the Center of Intolerace?

As I have mentioned before, I live in Tucson. When this past weekend's tragic events occurred here, it was surreal to see the city where I live on the news. I had been to that Safeway and I had eaten dinner last Christmas at the Chinese restaurant in the shopping center that was roped off with police tape.
I hope to make President Obama's speech tomorrow at the McKale Center. I leave you with Jon Stewart's reflections.


Posted by Cruz Nicholas Medina at 7:54 PM No comments:


Technology, Teaching and Rhetorical Analysis
I was asked to speak to a group of first year graduate students about teaching rhetorical analysis and using technology. This is a short video I put together using the Xtranormal software.
Posted by Cruz Nicholas Medina at 5:01 PM No comments: