So You Want a PhD in the Humanities

From what I understand of this website http://www.xtranormal.com/makemovies/, you can create a computer generated dramatization of your writing by simply typing in a dialogue (note to self: create my own later). While this is a great resource for the Controversy Analysis assignment that we have students research and then turn into a Public Argument, the subject matter in the video I've embedded is a bit depressing as someone earning a PhD in English.

For some reason, I feel as though I'm not going to get around to doing as much writing today as I would like to, but if you have some writing you'd like to submit to the National Gallery on Writing, click on the image; it goes to the NCTE online gallery.
Posted by Cruz Nicholas Medina at 8:28 AM No comments: 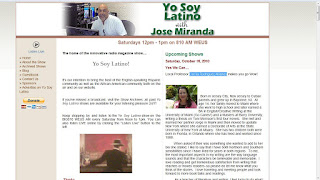 From the Yo Soy Latino website:
"if its Noon time and Saturday its time for Yo Soy Latino with Jose Miranda & Haydee Ayala on the Big 810AM in Orlando, Florida or on line at www.yosoylatino.us just click the listen live button and enjoy."
Posted by Cruz Nicholas Medina at 8:59 AM 1 comment:

Selena and the Conflation of Sexuality with Criminality

Studying for my Comprehensive Exams, I realize that I have neglected to post much on my blog. Fortunately, since this blog serves as a space of synthesis, I was inspired to post on The Decolonial Imaginary by Emma Perez.

Perez comments on how the life of Tejana artist Selena was mediated through the lens of her father. Thinking about this film, I had always thought of it through the lens of Latina/o students who listen to the music of Selena and relate to her music and life as someone who successfully navigated Mexican and Mexican American culture in the borderlands of Texas. Perez explains that “I was grateful that Nava had provided Latina/o communities with a story that would help us remember something of a young woman still revered by many”(119).

An aspect of the film and the life of Selena I hadn't taken into consideration was the murder and the complications of the relationship between Selena and Saldívar. Perez explains:

“The charge of lesbianism was made by disgruntled fans, but also by Selena’s father, to discredit Saldívar further, as if it were not enough that she stole, cheated, lied, and murdered. To his credit, director Gregory Nava ignored the lesbian rumors in the film, instead portraying Saldívar as a liar who betrayed her best friend”(119).

Perez points out the survival and revival of rhetorics of deficiency that conflate criminality with sexuality, attempting to use one to exacerbate the negativity associated with the other.

Posted by Cruz Nicholas Medina at 4:53 PM No comments: