In Her Own Words

In the fallout of media coverage regarding Dr. Ore's treatment by ASU Police Officer Stewart Ferrin, many have argued that the video on its own demonstrates that Dr. Ore is at fault for not showing ID. The fallacy of this flawed logic often has to do with the speaker of privilege never finding themselves in the context where they will be the audience for this kind of abuse of power and antagonism. To further avoid speaking behalf of the police video that has been taken out of context, I am posting a video below of Dr. Ore speaking for herself about the incident as opposed to engaging in polemic discussions with audiences whose ideological biases do not allow them to empathize with the inhumane treatment of others.

Or
Stand with Dr. Ore by contributing to her defense: http://erslegaldefense.com/

The excessive force used against Dr. Ore detailed in the Statement regarding this incident is enough to validate any stereotypes about Arizona polices inhumane treatment of people of color, demonstrated by Sheriff Arpaio's human rights violations. However, the culpability falls on the shoulders of the good people who stand by and allow for these injustices to be perpetrated. Maybe because "corporations aren't people," the administration at the Arizona State University can hide behind the veil of the institution and claim ignorance to the civil rights violations carried out by Officer Stewart Ferrin.

By ignoring the racial-profiling and excessive force of Officer Ferrin, ASU condones this kind of treatment as status quo for the culture of inequality on campus and in surrounding Maricopa County.

“ASU authorities have reviewed the circumstances surrounding the arrest and have found no evidence of inappropriate actions by the ASUPD officers involved. Should such evidence be discovered, an additional, thorough inquiry will be conducted and appropriate actions taken."

ASU's response, or lack thereof, communicates the message that the police have the right to profile as long as they claim an excuse like "obstruction of a thoroughfare," even if that means that they caused you to stop in the middle of crossing said thoroughfare.

Posted by Cruz Nicholas Medina at 12:04 PM No comments: 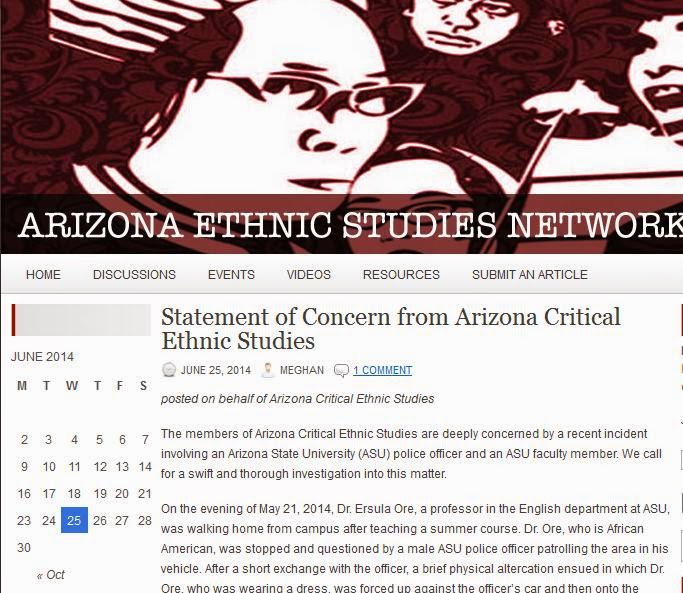 It doesn't feel good to say I told you so Arizona...Even as Arizona Superintendent of Education John Huppenthal, who is infamous for enforcing HB 2281 on Tucson's Mexican American Studies department, admits to racist blogging, it's too late. It's too late for the students who were robbed of a culturally relevant education that served it's population. It's too late to bring back all of the committed educators whose time and energy were diverted from teaching to deal with a racist law whose enforcers are now publicly admitting to their own racism. But the voting block of Arizonans who elected Huppenthal, his role-mode/predecessor Tom Horne, and the likes of Joe Arpaio won't have their minds changed even when presented with facts that counter those beliefs. You can't mess with the terministic screen of ideology, especially when only relying upon cognitive dissonance.

Posted by Cruz Nicholas Medina at 7:57 PM No comments: