Branching Out to Additional Media Platforms

Just started a Tumblr at http://pochopop.tumblr.com/. It relates to a writing project that I'm working on and that I'm super excited about. Something about Tumblr has lured me over to creating a new media object for this project so that I might continue to update ideas I'm collecting, though perhaps not give as much attention to the writing of as I might a blog post--I'm thinking a cross between Twitter and Blog. 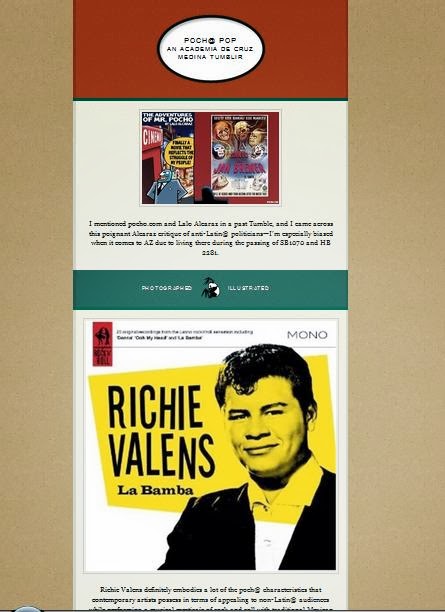 Tumblr seems much more geared towards images in the way that Twitter is dedicated to concise messages that  present persuasive reflections of reality. One of the themes or trends/characteristics of Tumblr I'm noting is emphasis on pop culture mash-ups.

Some of the favs I've enjoyed include the following. I'm sure they're not new for most of y'all, if only because I've definitely referenced both the Kanye and Coach Taylor tumblrs in a previous post on memes.

Not academic, but amusing:
http://kanyewesanderson.tumblr.com/


Posted by Cruz Nicholas Medina at 8:11 PM No comments:

Border Symposium at University of Arizona

I'm sorry to be out of Tucson for this symposium that's coming up September 13. It's free to register and I really love the work of both the keynote speaker Victor Villanueva

and Plenary speaker Curtis Acosta. Villanueva's work has been extremely influential in discussions of race, language, and rhetoric. Acosta's teaching and activism in the fight against the ban on Ethnic Studies in Tucson has been inspirational in the context of negative portrayals by media and legislators.

Posted by Cruz Nicholas Medina at 8:55 PM No comments: