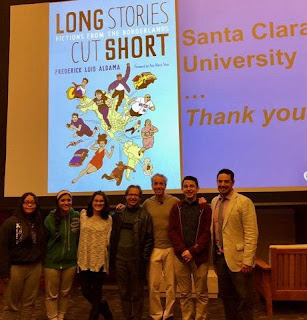 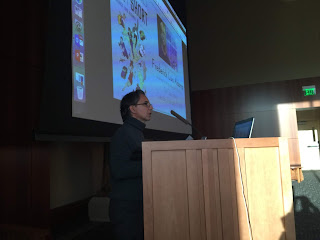 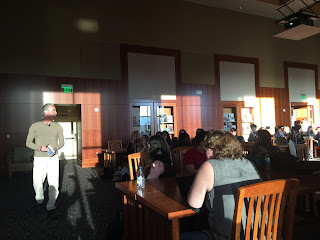 Another thing that I found interesting was how easy he made it to latch onto characters. For example, when he was describing the life of Carlos, who’s children both wound up in the hospital for unfortunate reasons out of their control, I felt as though I was a part of that journey. I kept wondering to myself, how, in one page, am I so moved by a character? I’m sure it has taken years of practice for Aldama to be so comfortable with language that he manages to cut out 60% of the words but still provide the same dramatic effect. This point also led me to wonder, how different did it sound in Spanish? From my experience with the two languages, I have come across numerous words that just don’t translate. For example, “Mi virgencita Ranchera”, or “my little virgin rancher”. In English, I imagine a young, virgin girl who lives in a rural area. However in Mexico,”Mi Virgencita Ranchera” is my sweet Virgen de Guadalupe, who is one of my people, from the slums of Mexico. Even there, I struggle to describe the emotions that I feel when referring to her, so I can only imagine the challenges that Aldama faced when writing his flash fiction book.
Posted by Cruz Nicholas Medina at 2:46 PM No comments: 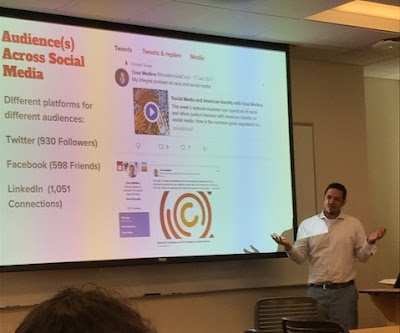 Thanks to Eileen Elrod for the invitation to speak today!
Posted by Cruz Nicholas Medina at 1:47 PM No comments: