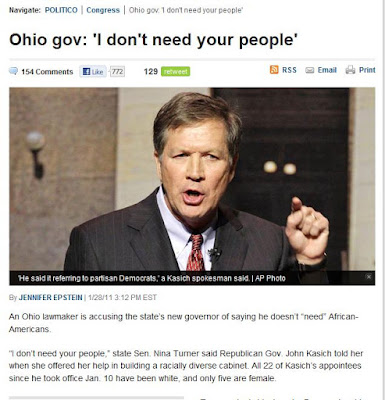 Turner, who is black and a Democrat, said on Thursday that she was “kind of perplexed” by Kasich’s comment. “ I wasn’t quite sure whether or not he was referring to my ethnic group people or ‘my people’ as in the 350,000 constituents I serve in this state that represent all ethnic groups, all religious groups,” she said. “I didn’t understand what ‘I’m not going to hire your people’ means.”
Read the rest: http://www.politico.com/news/stories/0111/48362.html
Posted by Cruz Nicholas Medina at 8:24 AM