It's no surprise Republican congressman Duncan Hunter is complaining about naming a Navy ship after Cesar Chavez, claiming the decision is "more about making a political statement than upholding the Navy's history and tradition." Political-correctness is one of those ideographs with negative connotations attached to it which conservatives euphemistically deploy to cover intolerance to racial diversity. 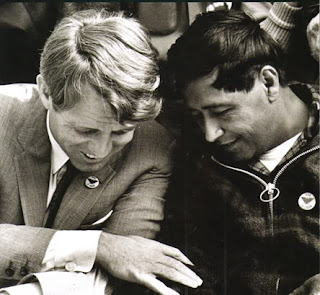 However, I'm not sure I much support Chavez' name being used on a Navy cargo ship either. Chavez is known for his non-violent practices, such as his hunger strike and boycott of grapes, so it doesn't seem fitting to name a vessel used for military use to bear his name. I tend to agree with Randy Shaw from the article who says "Chavez's "absolute core beliefs was nonviolence." Shaw goes on to speculate that Chavez probably wouldn't have wanted a military vessel named after him."

You can read the story about the controversy over naming a Navy ship after Ceser Chavez here:
http://news.yahoo.com/s/yblog_upshot/20110518/pl_yblog_upshot/navys-plan-to-honor-cesar-chavez-irks-lawmaker
Posted by Cruz Nicholas Medina at 4:40 PM