Limbaugh's Comments on Huerta and Women Synecdoche for Conservative War on Women
Thanks to Elias Serna for turning me onto this article on the UFW site: 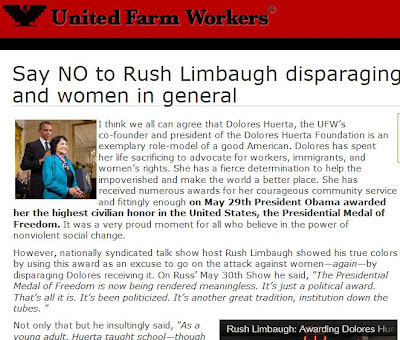 From the article: "On Russ’ May 30th Show he said, "The Presidential Medal of Freedom is now being rendered meaningless. It’s just a political award. That’s all it is. It’s been politicized. It’s another great tradition, institution down the tubes. "
Not only that but he insultingly said, "As a young adult, Huerta taught school—though she never had an education degree—until 1955, when, as a single mother of seven children—she now has eleven—she launched her career as a political activist. "
Read the whole article here: http://action.ufw.org/page/speakout/stoprush
Below is the video of Limbaugh posted on the UFW's site: