A Short Story of Mine

On this blog, I have a great deal of posts related to the strange, and twisted Arizona politics that control the minds and bodies of Latin@s. With that said, it's only natural that I would write a short story that addresses this socio-political landscape that continues to operate under the mythos of the Southwest, despite the pre-existing historical trajectory of Latin@ occupation and migration through the borderlands of the US.

" incorporates elements and knowledge from Mesoamerican culture that is often dismissed by those fetishizing representations of the Southwest visible in such popular culture manifestations as those in the cowboy-western genre, and, specifically noted in "Estado de los Muertos," Tony Hillerman

I would be remiss if I didn't mention a recent news story regarding Disney and Dia de los Muertos covered on Pocho.com: http://pocho.com/walt-disney-inc-wants-to-trademark-dia-de-los-muertos-toon/ 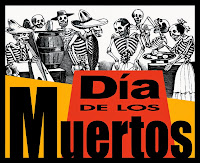 Posted by Cruz Nicholas Medina at 10:17 AM