Coming Soon: Q&A with fellow Reflections contributor Elias Serna
Having earned my PhD this past May at the University of Arizona, I was in close proximity to not only Tucson Magnet High School where the Ethnic Studies program was outlawed by House Bill 2281, but I also had the opportunity to interact with MAS teacher Curtis Acosta and teach students who were MAS graduates. In this forthcoming issue of Reflections: A Journal of Public Rhetoric, Civil Writing, and Service Learning, I have an article on a student publication that I co-edited in Tucson during the passing of SB 1070 and HB 2281. What makes the student publication Nuestros Refranes worth examining was that the prompt for the writing was designed to be culturally-relevant in much the same way that the TUSD MAS program's curriculum was meant to reflect the reality of the students it educated. In addition to my own article, I'm excited to read Elias Serna's article because I have come to know Elias through his activism and research with Tucson Ethnic Studies. Coming soon, I'll be including a brief interview with Elias regarding his article and the current projects he active with. Elias Serna, a PhD Candidate at UC Riverside, in August won the Antiquarian Booksellers' Association of America 2013 National Collegiate Book Collecting Contest. 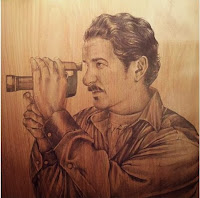 (Portrait of Serna by Shizu Saldamando)

In the meantime, an extended interview with Dolores Huerta

The video below is an extended interview from the documentary called Outlawing Shakespeare that I posted earlier.

Read more about Serna's Book Collector Award
A guest blog post of mine on Arizona in Spanish: http://www.letraslibres.com/blogs/frontera-adentro/educacion-contra-corriente-en-arizona
Posted by Cruz Nicholas Medina at 7:38 PM