“(Who Discovered) America”: Ozomatli and the Mestiz@ Rhetoric of Hip Hop"

My favorite bit from the article's conclusion:

"The polyrhythmic drums break the beats of banda and bounce to the accordion of conjunto while social constructions of class, sexuality, and citizenship are called into question through the rhyming in time to the Afro-Cuban clave. For those who ask what is happening in hip hop, they need only roll down their windows and listen to the news coming to them from the loudspeakers cranking out tunes from a quinceañera or from the corner hip hop battle where the next Plato jots down the rhymes from the barrio Socrates who squashes sophistic MCs." (20) 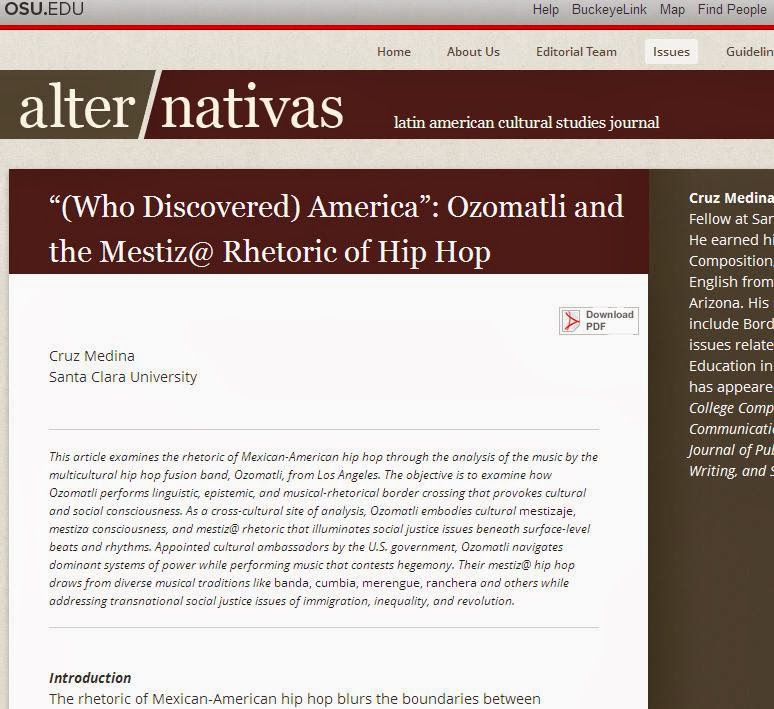 From the abstract:
This article examines the rhetoric of Mexican-American hip hop through the analysis of the music by the multicultural hip hop fusion band, Ozomatli, from Los Angeles. The objective is to examine how Ozomatli performs linguistic, epistemic, and musical-rhetorical border crossing that provokes cultural and social consciousness. As a cross-cultural site of analysis, Ozomatli embodies cultural mestizaje, mestiza consciousness, and mestiz@ rhetoric that illuminates social justice issues beneath surface-level beats and rhythms. Appointed cultural ambassadors by the U.S. government, Ozomatli navigates dominant systems of power while performing music that contests hegemony. Their mestiz@ hip hop draws from diverse musical traditions like banda, cumbia, merengue, ranchera and others while addressing transnational social justice issues of immigration, inequality, and revolution.

The whole spring 2, 2014 - The Voices of Latin/o American Hip-Hop issue is online here:
http://alternativas.osu.edu/en/issues/spring-2014.html#essays1
Posted by Cruz Nicholas Medina at 9:30 AM