From a Distance
A photographer friend of mine sent me this photo and said some of the photos he's taken are on the Occupy LA Facebook page, since it seems mainstream media has it's own agenda in terms of what and how it chooses to cover this. 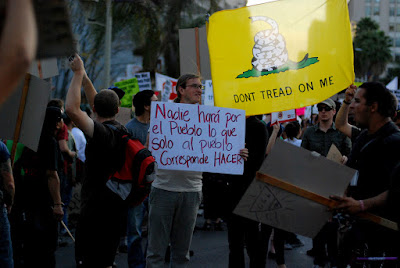 Another image that's made it's rounds on FB showing how newspaper headlines are changed is this one which demonstrates hegemonic discourse in the media.

What's going on right now seems to be a synthesis of the severity of what's happening, and it's difficult to draw clear conclusions because there's also been controversy about the multiple messages within the diverse group of protesters.
Posted by Cruz Nicholas Medina at 1:04 PM