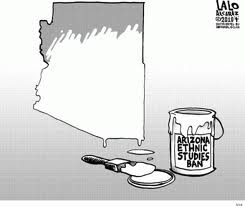 "An Arizona official who led the effort to suspend Mexican American studies from Tucson public schools is considering taking his fight to the state university system.

“I think that’s where this toxic thing starts from, the universities,” Arizona Superintendent of Schools John Huppenthal said in an interview with Fox News Latino.

The article goes on to say:


Huppenthal is not satisfied with the suspension of the Tucson program. He views the University of Arizona as another source of what he believes are biased educators."