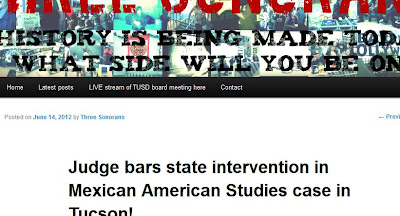 "Tucson, AZ – Today, a Tucson federal court barred the State of Arizona from intervening in an ongoing school desegregation case involving discrimination against Latino students by the Tucson Unified School District (TUSD). The State sought to intervene in order to impose arbitrary restrictions on ethnic studies courses in Tucson schools based on a 2010 state law, A.R.S. 15-112, that was proposed and has been used solely to target Mexican American Studies courses. The court rejected the State’s attempt to intervene, ruling that ” [a]ny state law or state interest found to be contrary to or an impediment to the desegregation efforts mandated by the Ninth Circuit Court of Appeals…must yield to the supremacy of the Federal Constitution.”