It's really not surprising that a court in Phoenix sides with the Superintendent, just another example of Arizona politics. But what's really infuriating is that Judge Kowal agrees with Huppenthal who lied about the results of a third party audit of Ethnic Studies, which found the program not to be in violation of HB 2281. 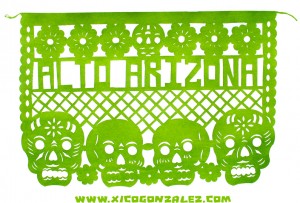 Art by Xico Gonzalez: http://xicogonzalez.com/casa/
Posted by Cruz Nicholas Medina at 11:08 AM