"This is Supposed to be an Immigrant Friendly City"

Yesterday, there was significant discussion by U.N.I.D.O.S about the arrest of Raul Alcaráz Ochoa, a migrant rights activist. I know some people who were going to the rally held today outside of Tucson Police Department, although the coordination between Tucson Police and Border Patrol demonstrates enforcement of SB 1070, which was supposed to be stripped of power.

From the petition to release:
"On February 17, 2013, Rene Meza was pulled over by Tucson Police, and when he couldn't produce a valid driver's license, Border Patrol Agents were called to detain Rene. Raul Ochoa, a long time resident and immigrant rights activist in Tucson, witnessed the incident and simply tried to stop the separation of yet one more family.    Both Raul and Rene were taken into custody by Border Patrol.  "

In the meantime, you can sign the petition to release here: http://action.dreamactivist.org/arizona/raulandrene/ 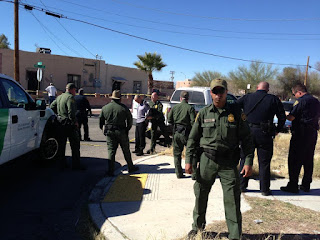 "As of this morning, Tucson immigrant rights activist Raul Alcaráz Ochoa remained in U.S. Border Patrol custody after being arrested yesterday. However, the Range has learned that Ochoa was released this afternoon and will attend today's rally in front of the Tucson Police Department, 270 S. Stone Ave., at 4 p.m.
The Range first reported on Alcaráz Ochoa's arrest yesterday afternoon and continued to post updates through the night..."

"According to a statement last night from immigrant rights organization Corazón de Tucson, Ochoa, a community organizer with the Southside Worker Center and Corazón, placed himself under a Border Patrol vehicle to prevent BP from detaining and deporting Tucsonan Rene Meza Huertha.
Meza Huertha was reportedly stopped by TPD at 1:30 p.m. and was unable to produced a valid driver's license. TPD called Border Patrol to detain Meza Huertha. Ochoa witnessed what was taking place, noting that Meza Huertha's six children and his pregnant wife were with him when he was stopped by police.
At least six Border Patrol agents and four TPD officers on the scene when Alcaráz Ochoa was pepper-sprayed by Border Patrol, dragged out and then arrested.
Although Ochoa was released today, Meza Huertha remains in custody, and supporters at today's rally are calling for his release and an immediate halt of the cooperation between TPD and Border Patrol.
"This is supposed to be an immigrant friendly city," Garcia told the Range this morning. "TPD didn't have to call Border Patrol. They are going against their own counsel. We can no longer point fingers at Pearce and Arpaio. It's here, too. It's TPD. These kinds of actions are damaging to Tucson."