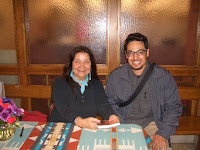 Silko noted that when Deloria's Custer Died for Your Sins: An Indian Manifesto came out, it was at a time when many Native American voices had been silenced, and even though Silko said she had yet to decide to pursue a career in writing, Deloria inspired her. Having also began a study of what she described as "Anglo American" law like Deloria, Silko wanted to follow Deloria's work of advocating for Native rights.

After completing three semesters of her study of law, Silko felt as though she could better criticize inequalities through the mask of fiction. Her recent writing has revolved more around nature after having lived in the Tucson mountains for the past 30 years--she jest something to the effect of, 'after all, what's more subversive than writing about grasshoppers?'