I read this article because I am acquainted with Eliza and she expressed her disappointment with how this piece was attacked as propaganda. After I read her piece, I scrolled through the comments, which were posted, and in many cases re-posted. All of the posts attacking Ms. Meza were signed anonymous and seemed to take the space and anonymity to go on anti-liberal/anti-undocumented diatribes. 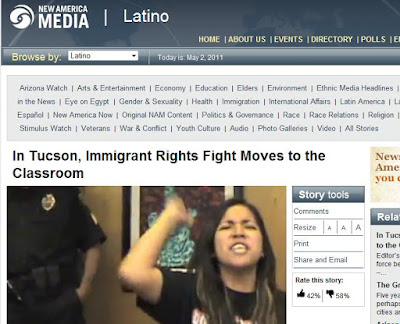 Hopefully these are a vocal minority, although they still indicate the presence of discriminatory sentiment and discourse in the collective conscious. Those posting would not feel they should post unless they knew they represented more than their own voice and flawed logic.

New American Media frames the Ethnic Studies Program as "popular" even though it is successful in raising test scores, graduation rates and rates of students continuing on to college.
Posted by Cruz Nicholas Medina at 11:43 AM