Inspired by my recent write up of Noam Chomsky and the announcement of Salman Rushdie's forthcoming memoir, I recovered notes I took when Salman Rushdie answered a Q&A session at Chapman University where I earned my Master's degree. The funny thing was I was the student speaker in the same John Fowles speaker series a week before, so it was a running joke at the time for us grad students in the series to say we were in the same series as Sir Salman Rushdie 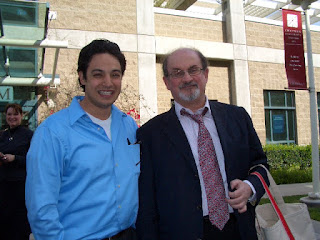 ,” and Rushdie cut him off saying, “That’s the last I want anyone calling me ‘Sir.’”

(Note: The Questions and Answers were dictated from notes, therefore every word isn’t exact.)


I asked him, “What have you found to be the most effective habit, or approach to writing, and has it changed over time?”
A: I have actually a really tedious work process. I treat it like a office job. I get up, I don’t go into an office, but I do a day’s work and stop. It has something to do when I was young and didn’t make enough writing to support myself, I worked in an ad agency. I learned that you can’t wait for inspiration. If you have a client coming in at four to see what you have, you have to just write it. This gets rid of the stupid performance writers allow themselves to have. The frame of mind is helpful.

The only ‘trick’ I could say comes from Hemingway

. He had this thing about writing one true sentence that you know for the next day, and it helps being able to start when you believe what you write.

You also have to have a good shit-detector. Most importantly, you have to know when it’s bad. You need to know when it stinks—you have to be your own worst critic.
I also set a daily word limit that’s artificially set low. So on a really bad day, when I’m not doing it well, I fool myself into thinking that I wasn’t that bad. And on a good day, I feel good about myself.


Someone asked Hemingway about the commitment of the writer. Hemingway said that the only commitment a writer has to have is the seat of his pants to his chair. Sitting down is the other ‘trick.’ You have to sit down; you can’t have a cup of coffee, or go for a walk.

, you write from the perspective of east and west, which do you identify with?
A: In East, West, the older generation in my family was more liberal than government. There’s always a tension between city and countryside, a resentment by people in country of the city. The United States and Europe, more people live in the city, and in India, 2/3 of the people live in villages.

Q: Which of your books is your favorite?
A: It depends which day you ask. I don’t read Salman Rushdie novels. Having written them, I’ve been with them long enough. Most writers say that it’s there most recent book. I would say Haroun and the Sea of Stories

because it’s more intimate because I wrote it for my son when he was ten. He’s twenty-eight now, but I realized subsequently that the best children books were written for particular children. Alice in Wonderland, Winnie the Pooh and Peter Pan, although Peter Pan was written for a group of children, it pleases more children when it’s written for a particular child. Alice [from Alice in Wonderland] was written for a particular girl; she’s opinionated, and tells people off.
I have another ten year old and he’s read Haroun, but he clearly knows that it was written for his older brother, so he asked me, “Where’s my book?” I was in the middle of my most recent book, so I asked him if I could finish this one before I begin on his, but I already know that my next book is for him.

Q: Do you believe that characters should be based on real people, or that they should be completely fictional?
A: I have no strong position on writing characters based on people. In order to make characters live on the page, they have to almost not be like the person that they are based on. To make the grandparent characters live in Midnight’s Children, they’re not as much like my real grandparents. Although my real grandmother was a bit like the character because she was ferocious, and the grandfather was similar in some ways.

I find that when you sell a lot of books, people want to be the models for your characters. It happens quite a lot actually. I was discussing Midnight's Children

in Bombay and afterwards, a woman walked up and smacked me with her fan. She said, “Naughty boy. Never mind, I forgive you.” She thought she was the model for one of my characters, but when I told her she wasn’t, she said, “I don’t know why you’re going on about it, I’ve already forgiven you.”
Another woman found seventy-eight things that were the same about her as a character in one of my books. She said, “He has stolen my life. He must’ve followed me. Of course he denies it.”
There’s a strange relationship between reality and fiction. Real life is often the starting point, but not the finishing point. The story you intend to write isn’t often the story that you write.

Q: Do you need to know the ending when you start writing?
A: I need to think I know the ending when I start. I do a lot of structuring and architecture, sometimes a year before, I flesh the skeleton out. If I don’t know the end, then the stories don’t end. More frequently though during the course of writing, I discover the book. The book you finish not the same you started.

I don’t write a genre, so they all come different. If I wrote about strike teams and global espionage, I would have a procedure. You discover the structure and it only works for that book.

Q: What do you think about non-fiction in fiction?
A: Well I’m definitely a post-something, post-modern, post-colonial, post…office. I don’t know. But we live in a strangley non-fictional moment. People reach for non-fiction books for answers.

Others think that fiction is to cover the non-fiction below the surface. If that were true, Nabalkov would be a pedophile because he wrote Lolita

People are often disappointed when they find characters aren’t based on someone. I had one story with a singer and another with a painter and people wanted to know who they were based on. It’s a problem, the autobiographical problem—people think the more they know about the life of the author, the more they’ll know about the book, and it will enhance the enjoyment of the book.

In one story I gave a character one leg when in reality he had two; that’s what writers call ‘revenge.’

But in Gulliver’s Travels, people didn’t really expect that Jonathan Swift had been to a land of small people, or that Robinson Crusoe were really about the travels of Defoe.
Crowds seeing Hamlet didn’t think Shakespeare were writing about the relationship with his father.

The autobiography can be a part of the explanation, but usually a story has nothing to do with real life. When you know about the author, it doesn’t help the reading of the text.

Maybe it’s the fault of the French. So much is…the Enlightenment. Dominance of literary theory has led people away from old fashion close reading. With literary criticism, you have this grid and you push it down on the book and if it fits, it’s a good book. It takes away from the pleasure, which used to be a good portion of the experience.

I think that the critic is the problem that exists between the reader and the writer. The opposite is sometimes true. I know of writers helped a critic’s reading of their work. One example would be Faulkner. In the middle of his career, his books were out of print, but an editor named Crowley at Penguin talked the publisher into coming out with a portable Faulkner. Crowley wrote the introduction and showed Faulkner’s writing to readers. How we read is a private act between reader and writer.

Q: India has a huge movie industry, why do you think it is that we don’t see many of their movies in the U.S?
A: It has to do with the dominance of the English language. The last time that Hollywood didn’t have the economic dominance was in the late ‘50s to the early ‘70s during the Golden Age of Silent Film. Hollywood lost control when French and Italian new wave came into popularity. World cinema was available; there were theaters in London’s West End that specialized in movies with subtitles. In effect, we’ve gone backwards, owning and disseminating a product.

The U.S is right now the only super power, so that only gives everyone else one place to hate. During the Cold War, there were two places to hate. Maybe China can have some.

Q: What’s the worst book you’ve read recently?
A: I know. It’s the worst book by far, The DaVinci Code. It was very, very, very, very, very badly written. Barely literate. Several chimpazees could’ve done a better job. It’s shit. This guy is dying in a gallery in the Louvre and he takes the trouble to write out a code—because we all would—and then the best French cryptologist comes in and says, “In all of my cryptology, this is something I’ve never seen.” And anyone who’s done a world puzzle is looking over her shoulder saying, haven’t you ever seen an anagram?

But this means that we have to be as stupid as the characters. Then the best French cryptologist is also the best French decoder of script. She says, “I know 270 types of script, but I don’t know this.” Meanwhile, we’re shouting, it’s mirror writing, hold it up to a mirror!

Then there’s the whole issue of ‘sangre’ meaning holy blood, but then they split it differently and it means something different, but that only works in romance languages. Take my word for it, it wouldn’t work in Aramaic, but they’re using a romance language that wouldn’t have even been around at the time that the writing would’ve been done.

Q: Have you read many contemporary writers?
A: I’m the guest editor for The Best American Short Stories anthology and it gives me optimism. I’m optimistic about the future of the form.

, Steven Milhouser. I was afraid of reading a lot of well crafted stories with no soul. I read a few of those. But there’s a domestic streak: broke up with wife, girlfriend, golf scores not high enough…I read a seven stories about golf. No stories about baseball, American football. If Martians came down, they would think gold was the national sport of America.

I’m reading Richard Yeats and I wish I’d read him earlier. No one does miserable marriages as well. His parents must’ve had a really bad relationship because Yeats knows them well. Although then I’d be guilty of the autobiographical fallacy.
In Revolutionary Road

, you see how life was in the ‘50s and they drink and smoke throughout the whole thing. Whenever a character is introduced, they’re mixing a pitcher of martinis.

I edited some of the questions for length and didn't include notes from the event open to the public later that evening.