A Video Argument for Ethnic Studies


I couldn't help but want to share this video argument by friend and colleague Alexandra Hidalgo on Ethnic Studies and raising bilingual children. Not only does she respond well to potential criticisms and fears of implementing ethnic studies into education, but she also has two niños the same age as mine (the older one even shares the same name as my older son). If you watch all the way to the end, you may see a brief glance of yours truly.

Note: this video argument was originally posted to Literacy & NCTE: the Official Blog of National Council for Teachers of English: http://blogs.ncte.org/index.php/2016/04/video-argument-ethnic-studies/ 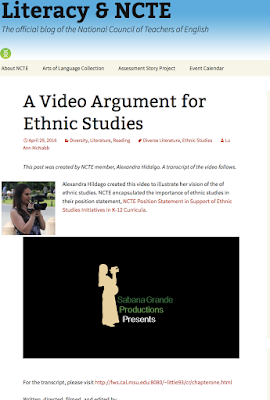 Thank you to:
National Council of Teachers of English
Conference on College Composition and Communication
Iris Ruiz
Christina Cedillo
Members of the Latin@ Caucus

Alexandra Hidalgo is a filmmaker and assistant professor of Writing, Rhetoric, and American Cultures at Michigan State University. She’s the co-founder and editor-in-chief of agnès films, a website that supports the work of women and feminist filmmakers."