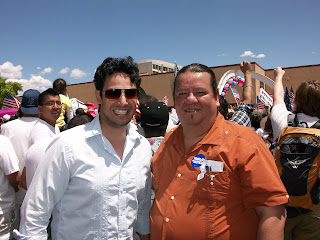 (Medina-left, Besa-right at anti-SB 1070 rally 2010)
My name is Andy Besa. I met Cruz in 2009, at CCCCs in San Francisco, and we hit it off immediately over beers. We were able to spend more time together in May 2010, when I attended the New Directions in Critical Theory Conference at University of Arizona in Tucson, which Cruz helped organize. So, according to Cruz, we’re “conference homies.” 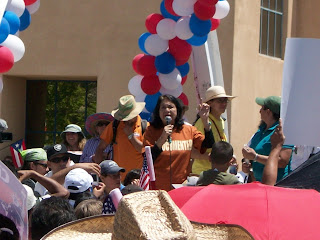 (Dolores Huerta speaking at SB 1070 rally)
I don’t regularly blog, and I don’t tweet. I don’t have a myspace or facebook page (a friend refers to all social networking sites as myface), and I don’t own a “smart phone.” In fact, sometimes I wish I didn’t even own a cell phone, but my wife insists. I am currently completing my Masters in Rhetoric and Composition at Texas State University in San Marcos, Texas. Recently, I’ve been interested in identity and how some folks want to assign identity to others.

In his book Bootstraps

, Victor Villanueva mentions being mistaken for members of other races or ethnicities. These references are inserted in the text and might seem to be simple misunderstandings, but I feel that they offer a glimpse into the minds of those who wish to define and assign identities to those who do not resemble them. Victor mentions being referred to as “my Jewish friend” and being addressed in Farsi. I’ve experienced this on several times, most often being mistaken for a Native American (technically true) or a Polynesian. The “Are you a Native American?” question always comes from Anglos, while the Polynesian questions have come from other Polynesians (Fijians and Hawaiians). The Anglos’ questions always seem to be about pigeon-holing, separating me from them and assigning me to a group; they want to determine my identity, assign me membership in a group, and move along. When addressed by Polynesians, the question has always been about including me into their group.


While I was in the military I served on peace-keeping duty in the Sinai Peninsula. The Fijian soldiers we met were convinced that I was one of them, a lost Fijian brother who had somehow gotten sidetracked and wound up in Texas. Like them, I am brown and have softly rounded features. Another time, as I stood behind the seafood counter while working at Whole Foods, a young Hawaiian woman looked at me for some time before asking: “You a local boy?” Having visited Hawaii and having been asked things like “What island you from bra?”, I realized what she was asking. I told her I wasn’t Hawaiian, and we had a short conversation in which she revealed that I could “pass for a local boy” (the more she said it, the more it sounded like loco boy). We then laughed together when I told her I would need to work on the accent. I find it interesting and informative that the exclusionary comments most often come from Anglos, while the inclusive questions come from brown people.
Texas is quite different from both California and Arizona, and for me, the difference is all about the difference. The Anglos’ comments, one of which came last semester in a graduate class in which I was the only non-white person, always seem about settling for them who I am. They seem to need to be able to pigeon-hole me. The woman who asked last semester was met with my new response:
Q: “Are you a Native American?” (always asked as though it’s a compliment)
A: “No. Well, yes, I just don’t know my tribe. I’m a man without a people (I say it sadly). Most likely, we are northern Coahuiltecans, my family has been in the Eagle Pass/Piedras Negras area for at least a couple of hundred years (my aunt has done the research). So, at some time in the past, my native ancestors made the conscious decision to leave their native identities behind, possibly because the waves of biological warfare had utterly destroyed their cohesiveness as a tribe.
I can go on and on about the whole “decimation of natives,” and it usually shuts down any further response, especially from Anglos. I go for guilt, and choose to point out that the source of the natives’ deaths is in fact, European intrusion. This often does not go over well in Texas, at least online. In Texas, we who know the truth of its creation must live with the myth of Texas. The myth says: Once there was a vast, empty land called Texas (no people, no natives, and especially, no Mexicans). Then, heroic Anglos came and made something of this massive nothingness. The myth ignores the fact that Texas was a Mexican state (Coahuila y Tejas) when the Anglos got here, that there were natives virtually everywhere, and that Anglos had agreed to convert to Catholicism and follow Mexican law as a condition of being allowed to settle in the province. Where is all this going?
Right back to identity and how others (usually Anglos in my case) want to assign identities to others in a way that makes the assigner comfortable. Also, it enables Anglos to say things like “Why don’t you go back to Mexico?” I love it when they say that! It lets me ask the leading questions: “Oh, when did your people get to Texas?” and “How long have your people been here?” They always answer proudly with something like: “We’ve been here for seven generations.” I respond, in a disappointed and apologetic tone: “Oh, my people have been here for about 20,000 years and we didn’t move, the border moved!” They don’t like that much either.
Posted by Cruz Nicholas Medina at 6:04 AM