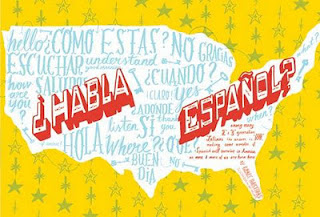 (image taken from: heatherleila3.blogspot.com)
Another case of calling the validity of Latinos into question in the contested state of Arizona. Lawmakers put through bills like SB 1070 calling into question the legality of all Latinos' citizenship and HB 2281's challenging of the validity of Latino/a history. Now, in protection of governmental power, a candidate whose primary language is Spanish is removed from City Council ballot due to her perceived proficiency or lack of in English.

From Huff Post Latino Voices:
"A Yuma County Superior Court judge touched off a furor last week when he disqualified Alejandrina Cabrera, a candidate for city council in San Luis, Arizona, from running for office over what he called a "large gap" between her English proficiency and that required to serve as a public official."

Written by Mary Slosson for Reuters
Posted by Cruz Nicholas Medina at 4:26 PM