Noam Chomsky at University of Arizona

“Education for Whom and for What?”

Noam Chomsky spoke at the U of A this evening and I had the chance to not only attend his lecture, but also ask a question during the Q&A session and got him to sign a copy of Hopes and Prospects

. Below are the notes of Noam Chomsky

's lecture, introduced as the "most cited living author" and third most cited behind only Plato and Freud.

The Elitist Intelligent Minority Viewpoint
1. Higher education was for elites, keeping the rest dumbed-down with technical training. In the 1920s, there were essays expressing this view about education for the elites. It said there was a necessity to distinguish between the responsible minority and the meddlesome outsiders, and the intelligent minority had to be protected from the herd.
He referred to Emerson who said something to the effect of needing to educate the majority to keep them from the minority's throats, frightening them into obedience through education.

Chomsky explained the framing of the Constitution was actually inspired by the elite, intelligent minority rationale. At the conference on the Constitution, the idea was put forward marginalize the public or they'd be trouble. And if they were allowed to vote, they would take land away from the rich. So, the Constitution set about to reduce democracy, keeping power in the hands of the Senate which wasn't voted on at the time.

Relating the forms of governmental control, Chomsky referenced Aristotle, who discussed and analyzed the different forms of government, finding democracy the least bad. Still, the idea of the poor taking the rich's money existed, although Aristotle didn't see it as a bad thing eliminating inequality, creating a middle-class, sometimes referred to as welfare state kinds of measures. 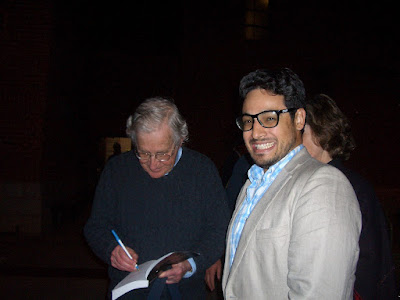 [Much love to Jerry Lee for snapping this snazzy pic]

Education is for Everyone Viewpoint
Advocating Jonathan Rose's The Intellectual Life of British Working Class, Chomsky said everyone should read Rose's piece which contrasts the pursuit of knowledge by working class Britain versus the philistines of the aristocracy.

Comparing the pursuit of knowledge by working class to the 19th century U.S., Chomsky pointed out that blacksmiths would hire young men to read to them the classics while they worked. His point was that there was a genuine pursuit of knowledge by working class people that taken away from people as the U.S. began to shift economies, where in which factories didn't allow the same kind of high culture enrichment. Chomsky specifically speaks of the factory girls who made these criticisms, feeling their dignity taken from them along with their intellectual pursuits.
In 1930s, there had been lively programs for worker education. Chomsky remarked that his own unemployed working class relatives at the time took part in high culture education programs, watching performances of Shakespeare and other activities.
He spoke of images from the Enlightenment regarding education. He spoke of pouring water into an empty vessel, which Chomsky admitted tended to have cracks allowing for contents to leak out.
He then spoke of the image of the string laid out which symbolized the path a student could take, following the string in the direction of the student's curiosity. This cocept came from Humboldt who started  university system in Germany.


No Child Left Behind
Chomsky then discussed the state of science and how many over-strict procedures emphasizing rote memorization of scientific facts took the value and enjoyment of discovery out of how science is taught. Science became a game of recalling boring facts. He then explained how he'd gotten around Chemistry in college by not attending large lectures, skipping labs and filling in the lab books results that were logical based on the desired outcomes of the labs. He passed with an "A." This example he used to compare to the No Child Left Behind policy that's been around 10 years without progress, adding that serious education is radically different.

At MIT, where Chomsky teaches, he has a colleague who teaches science. Whenever a student asks the colleague what will be covered during the semester, the colleague answers: "It doesn't matter what we cover. It only matters what you discover."

Post World War II, Chomsky argued, changed the U.S. system of higher ed. The U.S. emerged as a global force. The U.S. pioneered mass education motivated by transition from agricultural economy to industrial economy. In the industrial system, people once again shed culture, and some went on strike for more dignity, feeling like slaves.

New Spirit of the Age
Gain wealth and forget all self.

No longer preservation of commons, protecting common forests from predatory acts of kings and nobles. The failure to attend to commons will be our undoing. [Applause from audience] 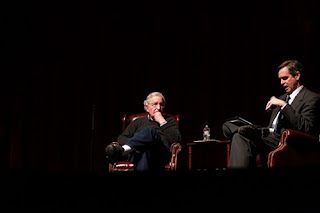 New drive to make everything a commodity. Chomsky cites Marketing and PR firms desire to "create wants", stimulating consumerism, paying attention to fashionable consumption.
Chomsky questions whether the New Spirit will be overcome, or whether we'll just be lemmings marching over the cliff?

After WWII, there was a shed of old world baggage. There was less desire to study in Europe for students in U.S. Those fleeing Europe were feared and disdained. Starting fresh was important.
There was a change in the nature of the economy with an impact on the university.

Disregarding economist Adam Smith's advice to the colonies of pursuing the competitive advantage and getting advanced goods from advanced countries, the U.S. did not become a third world country.

A memorandum by Lewis Powell rejected the civilizing effect universities had on the large population. He advocated for a certain kind of free enterprise, lobbying on behalf of tobacco and federal subsidies while also arguing that too much democracy was trouble. The public was supposed to be passive and apathetic [a return to both the intelligent privileged minority and similar to apathy toward politics of majority].

He ended his discussion speaking about a fee-free college in Mexico he admired, comparing to the current state of California's universities that are becoming more expensive and corporatized, educating only the privileged. Referring to his home campus of MIT, Chomsky said he recognized the influx of corporate funding and the threat of not renewing contracts. However, Chomsky said there wasn't an secrecy around the corporate funding at MIT, unlike some other schools which have had scandals. His point being that corporations push for short-sighted findings that produce financially beneficial results while overlooking long term potential results. 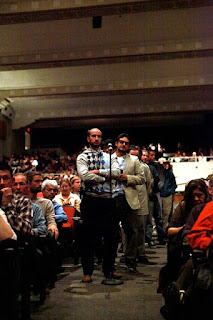 (Photo By Zachary Vito)
Q&A
I was fortunate enough to be the second person posing a question during the question and answer portion (see photo above). I started by saying the majority of people there believed education is for all, and in light of issues like No Child Left Behind and HB 2281, how were we to find hope and inspiration as educators?

He responded talking again about the free university in Mexico and the student movements currently going on.

There were many more questions about the Occupy Movements which Chomsky supported, hoping that the strategies by the movement wouldn't have diminishing returns and that the people who the activists are trying to connect with (the rest of the 99%) aren't turned off by the occupy tactic.

Video of Chomsky's lecture from Arizona Public Media.(I ask my question at 1:26)

I apologize for any spelling and other errors, but I'm writing this the night of, directly from notes.

The link to the video of his Feb 7 talk: What is Special about Language?