Tis the Season for Conferences

It might only be the beginning of February, but I'm gearing up for March.

I mentioned the international conference on Technology, Knowledge and Society I attended at UCLA in January and that was only the beginning of the presentation pandemonium to come. Somehow, I managed to submit to conference convening primarily in March.

First off, I'm off to San Marcos, Texas where I was a predoctoral fellow. There, I'll be presenting as a part of the Tejas Foco of the National Association of Chicano and Chicana Studies Tejas Regional Conference.

As in the image above, I will then be in St. Louis, Missouri from March 21-24 for the 2012 CCCC. As a past CCCC Scholar for the Dream, I always look forward to attending the ceremonies along with this years scholars--one of the PhD students I peer-mentor is one of this year's award recipients. Not to mention all of the great NCTE Latina/o Caucus workshop/meetings.

Rounding out March, I'm heading to UCSD for the  2012 Cultural Studies Association Conference, themed CULTURE MATTERS from March 28 through April 1.

I'm getting tired just thinking about all of the travel, but I think these conferences reflect the intersections of my research interests and will charge my scholarly battery with great presentations and discussion. 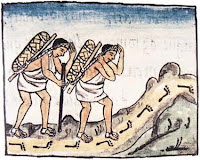 Crossing boundaries and speaking in foreign tongues like a pochteca...